The Traitor
Who Wasn’t

The story of Herbert Norman

and respected Canadian diplomat hounded to his suicide, in Cairo in 1957, by American McCarthyites seizing on his dalliance with the ideas of communism. Norman was interested in Marxist thought, and probably remained a moderate socialist throughout his life… but he was not a life-long communist and did not betray Canada, as alleged by the FBI, RCMP/Security Service and McCarthyites.

This article will not retrace the debate around the accusations leveled against Norman. Excellent books and articles achieve that goal. The story of Herbert Norman is fascinating from a different perspective: it brings us back to the days of war and postwar intelligence, which have had a structuring influence on today’s intelligence relations.

Norman probably was a de facto communist – or close to one – in the 1930s, while at Cambridge University. So were many other students. Some were Soviet spies. The vast majority, including Norman, were not. By the end of the 1930s, he had given up his Communist sympathies, as did so many other fellow travellers as they left the folds of academia for the real world.

Peyton V. Lyon, a former Foreign Service officer and then Adjunct Professor at Carleton University, was contracted in 1989 to assess the various allegations and was given access to all Canadian government documents relating to Herbert Norman. He is the only writer on Norman to have had such total access. His conclusion was that Norman was neither a spy nor a traitor.

In his report, Peyton Lyon briefly acknow-ledges that Norman was associated with Canadian foreign intelligence during World War II and in the immediate years which followed. But he provides few details. Indeed, details of most of Norman’s intelligence activities remained classified until early in this century, about 60 years after his death.

Norman had been posted to Japan as a language officer in the late 1930s and was eventually repatriated after war with Japan was declared. His assignment in Japan did not include intelligence duties. Shortly after his return to Canada, and debriefing, Norman was assigned to intelligence functions within External Affairs. When a second group of Canadians were repatriated from Japanese captivity and returned to Canada in 1943 aboard
the Swedish ship S.S. Gripsholm, Norman prepared the detailed political and intelligence questionnaire to be used in their debriefing. Norman and a Captain from military intelligence named Archibald then joined the ship in Rio de Janeiro to debrief the returnees en route home.

By the fall of 1944, the outcome of the war was already foreseen and, with human resources at External Affairs in short supply, Norman and his staff, only ever a few, returned at the beginning of 1945.

By this time Norman was already heavily involved in foreign intelligence matters with the Examination Unit (XU), the wartime predecessor to today’s Communications Security Establishment (CSE), Canada’s SIGINT service, which had been established by External Affairs early in 1941. Lester B. Pearson, having returned from a posting to London which included liaison duties with British intelligence, oversaw Canada’s small intelligence organization. He left most of the daily tasks to Tommy Stone, a middle-ranking Foreign Service officer.

In the spring of 1942, Stone established an Information Centre at the Examination Unit, largely a research organization to support SIGINT activities. That September, Stone also established a very secret External Affairs unit under Norman to liaise on SIGINT with British Security Coordination, the British intelligence station in New York. The new unit was Canada’s first all-source intelligence analysis organization. For the first year, its focus was exclusively on Japan, to take advantage of Norman’s particular skills and knowledge. In the second year a second officer, A.R. Menzies, was added to analyze Canada’s SIGINT collection against Vichy France (and later the Free French).

By the fall of 1944, the outcome of the war was already foreseen and, with human resources at External Affairs in short supply, Norman and his staff, only ever a few, returned at the beginning of 1945. So did all the files which they had worked on.

Back at External Affairs, Norman assumed new responsibilities. Although it appears that he no longer prepared extensive intelligence assessments as had been done while co-located with XU, he continued to review SIGINT on Japan.

Most information about Norman’s unit remained classified until very recently, even though the history of XU was made public in several stages. The little information available on the special intelligence section comes from CSE files which have been released to Library and Archives Canada (and declassified). The files of the special intelligence section returned to External Affairs in 1945 were not among the files which passed to CSE from XU (and CBNRC, a postwar name for Canadian SIGINT).

Only one of the special intelligence section’s assessments prepared by Norman’s unit at XU appears to have survived. It was written in 1943 and is a report on the Dutch East Indies, occupied by the Japanese. It covers Japanese and Sumatran society, nationalism, ethnicity and the Japanese occupation of the islands. It was an excellent, very detailed intelligence report and one can assume that it was typical of the production of the special intelligence section.

The whereabouts of other reports from the secret unit are unknown. They may have been destroyed. They may also rest somewhere in the still-secret intelligence files of Global Affairs Canada.

Canada’s wartime intelligence partner in the United States was primarily military intelligence (G2), which had responsibility for SIGINT. A highly stressed relationship existed between the American armed forces and the US Office of Strategic Services (OSS), run by ‘Wild Bill’ Donovan, a World War I Medal of Honor winner and leader of an intelligence organization pursuing flamboyant, commando-like intelligence activities. The American military, however, did not want Canada to deal with any of the OSS.

OSS made a war contribution but not as dramatic as its members claimed in their memoirs. OSS, however, possessed what eventually became an excellent intelligence analysis organization (which formed the postwar INR, the current intelligence unit in the State Department).

Herbert Norman insisted on establishing ties to the analytical side of the OSS and formed a tenuous relationship. In the fall of 1942 Norman made a regular visit to the BSC in New York and onward to OSS in Washington. The OSS already valued the intelligence assessments prepared by Norman at the special intelligence unit in the XU, and he valued the raw material which the OSS could share with him.

The relationship, however, remained troubled. Canada feared that Norman’s links with the OSS would come to the attention of G2 and cause problems for Canada’s more important intelligence ties to US SIGINT. Other relationships also existed between Canada and the OSS, but they were carefully controlled for fear of discovery by G2.

The OSS at some point also attempted to recruit Norman as a permanent liaison officer in Washington between the OSS and Canadian and British intelligence organizations. Norman’s views on this are unknown, but External Affairs would never have agreed to this since it would have directly threatened Canada’s more important intelligence ties with G2.

Norman, a relatively junior External Affairs officer throughout the war, was often tasked with participation on Canadian interdepartmental intelligence committees, particularly towards the end of the war, when he was back at the Department and less focused on intelligence analysis. He was not a senior participant in these matters but more a highly respected junior officer, who had the skills to represent the Department well when called upon to participate in meetings.

With the conclusion of World War II in 1945, most of Canada’s intelligence commitments were drastically reduced, at least for the first few years. By this time Norman was viewed as an important young officer. When Yale University sought to recruit him for a teaching position, Prime Minister Mackenzie King intervened with Lester B. Pearson to ensure that the department did not let him leave. Instead, after a brief sojourn in the Philippines helping to repatriate captured Canadians, he was promoted and sent to Tokyo on loan to the Allied occupations authorities, where he worked in the US Counter-Intelligence Corps (CIC) with the nominal rank of Major.

The stint attached to US military intelligence lasted about a year, after which Norman briefly served in Washington as an assistant to Pearson, before returning to Tokyo as Head of the Canadian Liaison Mission, and advisor to General MacArthur, which lasted until 1950. The end of his tour in Japan and planned posting to Ottawa in the American and Far Eastern Division coincided with the start of the hounding of Norman by Americans as a communist and likely Soviet agent. 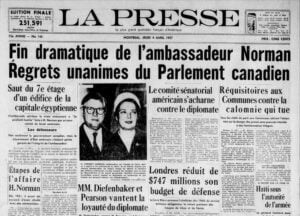 Thus began Norman’s nightmare. It continued intermittently until his death in 1957. No declassified files suggest that Norman’s involvement in intelligence matters continued after his return from Japan. That is not unusual. Then and now, Canadian diplomats rotate in and out of intelligence assignments as resources and interests dictate.

There is evidence that the real target of the FBI and McCarthyites, with implicit support from the RCMP/Security Service, was Lester B. Pearson, first a Foreign Service officer, then Minister of External Affairs, and finally Prime Minister. His fall as a Communist supporter, a Communist, or a Soviet spy would have greatly enhanced the political prestige of extreme rightists in both North American countries. Like Norman, Pearson was the victim of innuendo, fake news, and pure hatred. There is no, repeat no, evidence that even begins to suggest that Pearson was a national security threat. Nor that Norman was.

In the more than 50 years since his death, none of the multiple file searches, defector debriefings, and other intelligence sources have shown any evidence of Communist affiliation by Norman after completing his university education, nor of espionage on behalf of the Soviet Union or any other foreign power. Norman was a victim of American paranoia about traitors and spies which followed the Gouzenko defection and revelations, and spurred to insane extents by Senator McCarthy, a man of limited intellect but unlimited adherence to “fake news”.

KURT F. JENSEN is a retired Foreign Service officer. After retirement he became an Adjunct Professor at Carleton University, where he taught courses on foreign intelligence. He is the author of Escape from Germany (2019).

Diplomatic Reflections on the Myanmar Uprising, Aung San Suu Kyi, and the Generals